Please welcome Sophia Rose to the blog today with her review of Castle Shade by Laurie R. King. This historical mystery is the seventeenth novel in the Mary Russell and Sherlock Holmes. Grab a cuppa and travel with us to 1920s Transylvania. 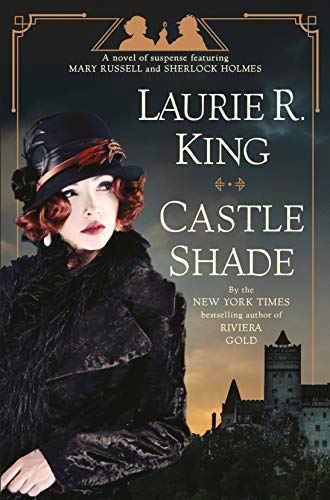 A queen, a castle, a dark and ageless threat—all await Mary Russell and Sherlock Holmes in this chilling new adventure.

The queen is Marie of Roumania: the doubly royal granddaughter of Victoria, Empress of the British Empire, and Alexander II, Tsar of Russia. A famous beauty who was married at seventeen into Roumania’s young dynasty, Marie had beguiled the Paris Peace Conference into returning her adopted country’s long-lost provinces, singlehandedly transforming Roumania from a backwater into a force.

The castle is Bran: a tall, quirky, ancient structure perched on high rocks overlooking the border between Roumania and its newly regained territory of Transylvania. The castle was a gift to Queen Marie, a thank-you from her people, and she loves it as she loves her own children.

The threat is . . . well, that is less clear. Shadowy figures, vague whispers, the fears of girls, dangers that may be only accidents. But this is a land of long memory and hidden corners, a land that had known Vlad the Impaler, a land from whose churchyards the shades creep.

When Queen Marie calls, Mary Russell and Sherlock Holmes are as dubious as they are reluctant. But a young girl is involved, and a beautiful queen. Surely it won’t take long to shine light on this unlikely case of what would seem to be strigoi?

1920s Transylvania might be centuries from the Blood Countess and Vlad the Impaler, but something dark is lurking in the shadows of Castle Bran sending Russell and Holmes to delve into the mystery. I couldn’t wait to crack the cover on this latest historical mystery in a long-time series that I love and it didn’t hurt that the setting was the atmospheric Romanian countryside.

Castle Shade is the seventeenth of the Mary Russell and Sherlock Holmes series. It could be read standalone in a pinch though it offers a better reading experience when the series is taken in order.

After wrapping up their latest adventure in Monaco and tucking away the secret, she is keeping from Holmes, Mary Russell is ready to assist on a new case with her husband, Sherlock Holmes, commissioned by Romania’s Queen Marie who believes a threat has been made against her youngest daughter and seems focused at her retreat, Bran Castle. Mary and Holmes find a village and castle steeped in the superstition of the past, but with modern ways making gradual in roads. They discover a chain of curious events affecting those in the village and castle that seem designed to rouse the village into a fervor of terror aimed at their queen. Late night forays, careful engagements with village personalities like the Roma in their nearby encampment, a woodsy witch, a modern doctor, and a castle majordomo who might know more than he’s saying.

At this point, Mary Russell has come into her own and has been a full detecting partner with her husband, Sherlock Holmes, for some time. They divide tasks and sleuth away. This doesn’t mean that they don’t fear for each other’s safety or get upset when their partner is hurt. Nor does it mean that they have married life figured out. In fact, they seem to struggle a bit figuring that part out when the other side of their partnership goes so well. I’ve enjoyed seeing Mary grow into womanhood and grow into her roles throughout the series. She truly is the equal of the great detective and challenges his intellect as he does hers.

The setting for this latest mystery, rural post-WWI Romania, was written well. The author included the royal aspect, politics, traditions, and social life to add layers to the plot. I enjoyed this backdrop of the people from all classes who were well-represented in several side characters.

The mystery was a slow burn type as they steadily gathered facts and worked out who, what, and why. They figured out what was going on and then the who. I was interested, but I confess that the mystery side was a little lackluster.  There was no dearth of exciting moments, but they didn’t feel as life threatening, so my heart was in my throat.

That said, it was a pleasurable diversion and well worth my anticipation for the latest series release. Those who love Sherlock Holmes and Historical Mysteries should definitely give this a go.

Laurie R. King is the New York Times bestselling author of 27 novels and other works, including the Mary Russell-Sherlock Holmes stories. She is probably the only writer to have both an Edgar and an honorary doctorate in theology.

Never miss a post by adding Caffeinated to your Inbox

Sophia is a quiet though curious gal who dabbles in cooking, book reviewing, and gardening. Encouraged and supported by an incredible man and loving family. A Northern Californian transplant to the Great Lakes Region of the US. Lover of Jane Austen, Baseball, Cats, Scooby Doo, and Chocolate. Associate Reviewer for Delighted Reader blog.

Kimberly is a coffee loving book addict who reads and listens to fictional stories in all genres. Whovian, Ravenclaw, Howler and proud Nonna. She owns and manages Caffeinated PR. The coffee is always on and she is ready to chat.

Newer THE OCEAN IN WINTER by Elizabeth de Veer on tour July 2021 | AtSite.Store
Back to list
Older Grishaverse Re-Read: SHADOW AND BONE by Leigh Bardugo