THE GOLD IN THESE HILLS by Joanne Bischof on tour August/September 2021 | AtSite.Store


About The Gold in These Hills

One wild and mysterious ghost town. Two second-chance love stories. And the century-old legacy that binds them together.

Upon arriving in Kenworthy, California, mail-order bride Juniper Cohen is met by the pounding of the gold mine, an untamable landscape, and her greatest surprise of all: the kind and loving man who awaits her. But when the mine proves empty of profit, and when Juniper’s husband, John, vanishes, Juniper is left to fend for herself and her young daughter in the dwindling boomtown that is now her home.

Juniper pens letters to her husband but fears she is waiting on a ghost. Perhaps worse, rumors abound claiming the man she loves could be an outlaw. Surviving in a ghost town requires trusting the kindness of a few remaining souls, including the one who can unlock the mystery of her husband’s disappearance–and Juniper’s survival depends not only upon these friends but also the strength of heart she must fight to maintain.

Present day. Trying to escape the heartache of his failed marriage, Johnny Sutherland throws himself into raising his children and restoring a hundred-year-old abandoned farmhouse in what was once known as Kenworthy, California, in the San Jacinto Mountains. While exploring its secrets he uncovers Juniper’s letters and is moved by the handwritten accounts that bear his name—and as a love story from the past touches his own world, Johnny might discover yet that hope and resilience go hand in hand.

With The Gold in These Hills, acclaimed and beloved author Joanne Bischof returns with an absorbing masterpiece of faith, perseverance, and love that changes the course of history. 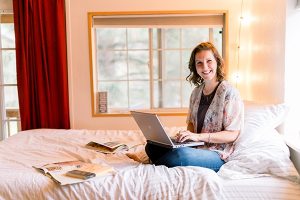 Joanne Bischof is an ACFW Carol Award and ECPA Christy Award-winning author. She writes deeply layered fiction that tugs at the heartstrings. She was honored to receive the San Diego Christian Writers Guild Novel of the Year Award in 2014 and in 2015 was named Author of the Year by the Mount Hermon conference. Joanne’s 2016 novel, The Lady and the Lionheart, received an extraordinary 5 Star TOP PICK! from RT Book Reviews, among other critical acclaim. She lives in the mountains of Southern California with her three children. Visit her online at JoanneBischof.com; Facebook: Author, JoanneBischof; Instagram: @JoanneBischof.

Newer Top Pop Characters with Floral Names
Back to list
Older On the Smugglers’ Radar: May 2021